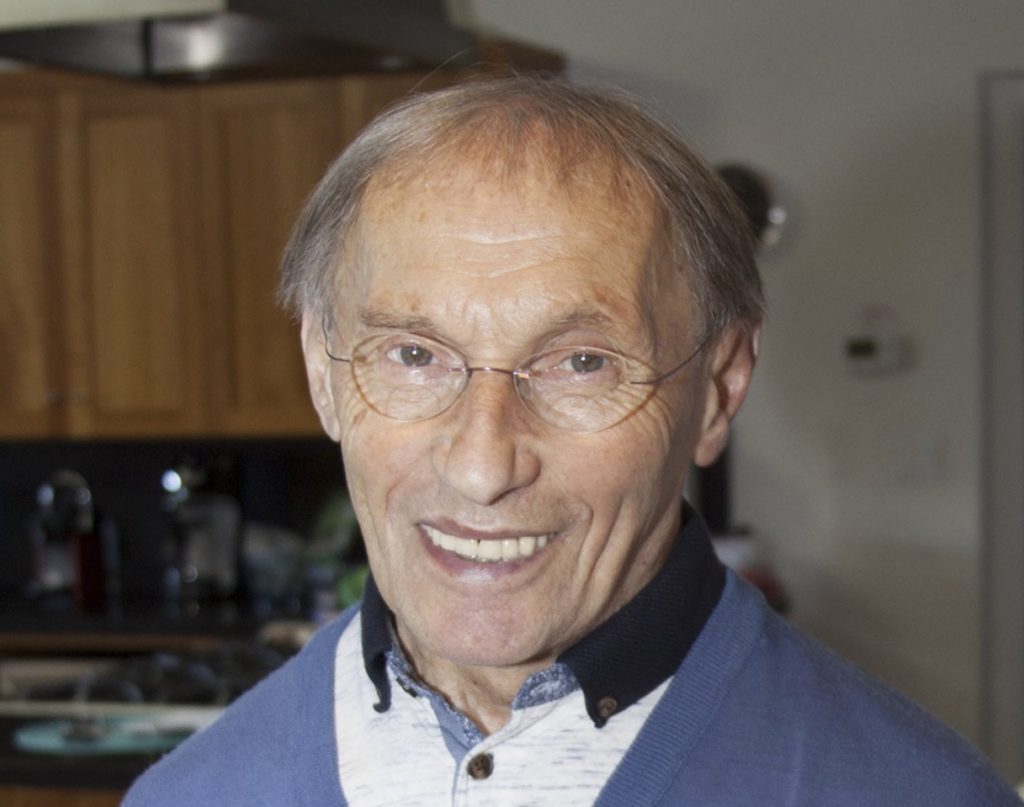 The intersection of life and death couldn’t be more poignant than Fr. Andrew’s death on Easter Sunday following a serious head injury. You might not have thought that his slight frame could have supported such a large, abundantly flowing heart. But it was his heart that guided the movements of his life, from his early call as a labor organizer to his later, lifelong vocation as a monk and priest.

Born in Bellusco, Italy, Andrew worked for years as a machinist and advocate for workers rights. He entered the Camaldolese Order on October 27, 1970 and proceeded through the novitiate to profession in 1972, making his golden jubilee – 50 years of monastic profession – this year. Andrew’s deep friendship with Fr. Robert Hale dates back to these years when Robert was studying and teaching in Rome and Andrew was studying for the priesthood. Andrew was ordained in 1979 and gained early leadership experience at San Gregorio where he was in charge of formation and the monastery itself for awhile. Also formative in these years was Andrew’s relationship with Prior General Benedetto Calati, who along with Robert, encouraged Andrew to travel to California. Calati’s focus on love was a perfect match for Andrew’s most fundamental way of being.

Though his first trip in 1980 was ostensibly just to learn English, he soon joined with Robert at the new Episcopal/Catholic Community in Berkeley, Incarnation Priory. Andrew took on leadership responsibilities early and was well positioned to become Prior of the joint community in 1988 when Robert became Prior of NCH. Andrew went on to become the first Prior of Incarnation Monastery. Andrew in many ways, was Incarnation Monastery: there from the beginning, caring for people, meeting pastoral needs and building the vibrant community we have today. For Fr. Andrew, it was important that there be, and continue to be, a Camaldolese Benedictine presence in the diocese of Oakland, witnessing to the current and future needs of Berkeley and the entire diocese.

Andrew’s loving presence and humility served him well. To earn a living, he worked as a Sacristan and even a house cleaner at times. He led retreats, did parish work – most notably for ten years at St. Catherine of Siena in Burlingame – and soon became chaplain for the Italian Catholic Federation. His role there included celebrating the mass in diverse venues around the Bay Area ranging from community centers to the vineyards in Napa. When Andrew retired from the Foundation after nearly 30 years, his loving, pastoral presence had earned him many lifelong friends.

Andrew said in an old newsletter column: ‘It seems to me that if we are able to penetrate the core of Benedict’s teaching on Humility, not in a pious way but as God manifested to us and all creation in Christ, in the Gospel, then we will be able to love our own faith, yes, and also accept the others who seem different from us’. And it is that spirit of radical hospitality that guided Andrew’s heart and the growth of Incarnation Monastery.

Arthur and Andrew on pilgrimage.

Fr. Arthur Poulin came to Incarnation in 1998 at the invitation of Robert and Andrew. Fluent in Italian he often joined Andrew’s work with the Italian Catholic Foundation. Andrew was always very supportive of Arthur’s calling to paint and helped orchestrate sales and gallery shows. In 2001 Andrew and Arthur led a pilgrimage to Italy for oblates and friends – it became the first of many. In Camaldoli, many pilgrims met Fr. Thomas Matus who came from Camaldoli to Incarnation in 2006 and Br. Ivan Nicoletto who came to Incarnation in 2012.

Andrew’s open heart and outreaching spirit guided him to support the first oblate program established by Robert in 1984. Andrew went on to become the Oblate Chaplain for Northern California. With an assist from oblates and friends, Andrew sponsored a vibrant newsletter for many years as well as a series of Quiet Days with a wide array of speakers including Bruno Barnhart, Michael Fish, Arthur and many many others from the broader community.

Before Andrew’s friendship with Incarnation’s nearest neighbor led to the acquisition of a separate residence for the monks, both monks and guests were co-housed at what is today referred to as the guesthouse. The guesthouse was then ‘men only’. Until, in 1998 two women, seeking short term housing while attending a professional training, accidentally reached Andrew rather than the guest master and were welcomed. All become fast friends.

And so Andrew expanded the circle of community at Incarnation over and over again through the outflow of love from his ever enlarging heart.

Fr. Andrew is survived by his sister Tilde, brother-in-law Emiliano, his nephews Gabriele and Lorenzo and his niece Armanda and their families.

The service will begin with stories and memories of Andrew shared by all. Eucharist will follow at 11am. Come early as parking will be difficult to find in the neighborhood. For those of you who cannot attend Andrew’s funeral celebration in person, it will be live-streamed, the link will be available on the monastery website.